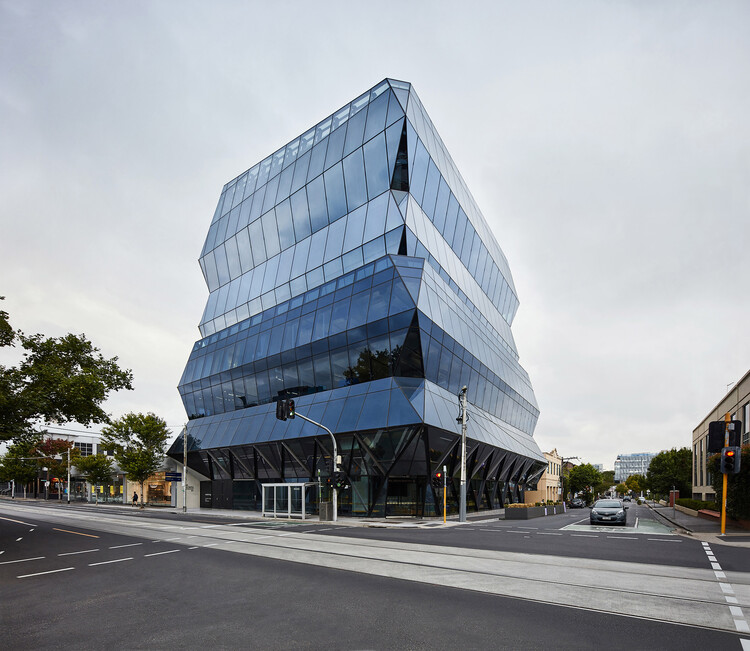 Text description provided by the architects. Sitting in contrast to the industrial grit of Cremorne as a progressive commercial building, Church Street reinforces its corner allotment, boldly ascending as a monolithic crystalline glass formation. The building’s faceted outer shell is an intentionally ambiguous interplay with scale. The futuristic form and materiality contrast with the surrounds, accentuating the building’s refined and polished nature against the area’s raw and textured industrial past.

Secondary to the building’s form is the unexpected fine articulation at the ground level where the building intercepts an adjacent laneway. A palette of multi-colored panels arranged in a concertina pattern picks up on the angles of the façade and connects conceptually to the brilliant refractions within a gemstone. The installation casts reflective light on the narrow pathway, invigorating an otherwise mundane laneway and providing a level of passive surveillance when illuminated at night.

The building is composed of retail and hospitality at ground level, and office tenancies above, leading upward to a roof terrace. The inclining and reclining façade elements deliberately obscure the floor plates they intersect with and act to obfuscate one’s sense of the building’s scale. The measured angling of glazing at ground level limits distracting reflections and the overhang over the footpath functions as a street-level awning. The building entry is defined by the glazed façade lifting to reveal a concrete background. The external materiality is echoed in the lobby with bright blue mirror extending throughout the double-height space. Spherical glass pendants suspended at varying heights feature as a dramatic installation whilst also providing a sense of spatial intimacy.

Church Street aims to bring an enhanced level of amenity to the workplace.  The building features a first of its kind multi-level bike stacker system and enhanced change rooms, to genuinely promote cycling as an alternative mode of transport. With landscaping by TCL, the roof is a social space encouraging connection between staff while offering visual connection to the city skyline.

As the faceted glass bands ascend, the subtle shift in tonality responds to a gradual progression from the building’s industrial base, upward toward the sky. The tonal transition occurs at a height approximate to that of the surrounding suburban buildings. Above, the glazing is lighter and the building further set back. In the resulting interstitial space, a balcony encircles the building for use by the Level 4 tenancy.

Church Street positions its eight stories as an abstract sculptural object offering both contrast and balance to its unique industrial setting.