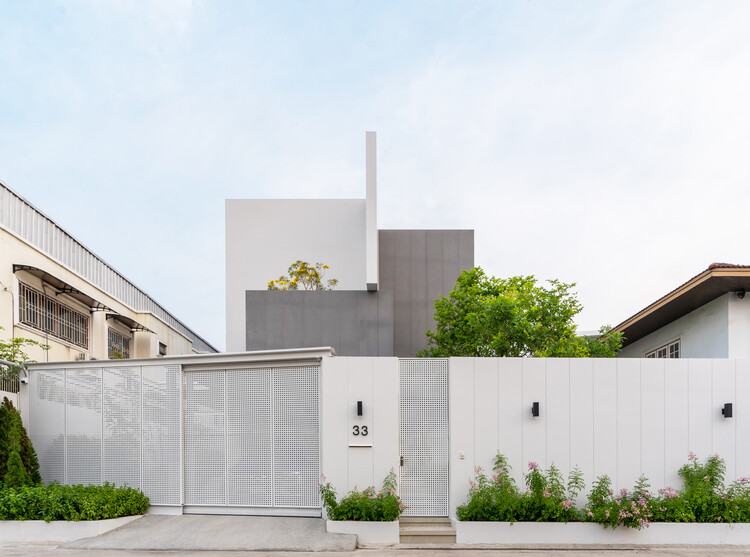 Text description provided by the architects. Sitting in a tropical region of “Suan Phak” district, Mit Chit House is the resulting expansion of a house originally located off to the right of the property.  Designed and constructed to provide both additional living quarters and a larger common area for a growing family’s needs, the new expanse spans 350sqm of the 420sqm property.

Mit Chit House stands inside a well-established compound, surrounded by flourishing fruit gardens that, while beautiful, add to the housing estate’s aging aesthetic. Often almost too peaceful and quiet at the day’s odd hours, these elements combine to create an air of seclusion that inspired the name “Mit Chit”. Though literally meaning “close together”, the owners found another meaning to its name: “close friendship”.  This is because of the double meaning found in the Thai words Mit (both pronounced “Mit”) thus it is close to the existing house and also bonded the family closer together.

Designed to preserve the surrounding greenery while prioritizing safety, Mit Chit house is built with four miniature courtyards in its center that measure 3×3 meters and 3×5 meters. Open spaces, wide halls, and numerous windows take advantage of the natural source of light, inspire feelings of freedom and closeness to nature. No matter where you stand, a gorgeous view of greenery and the house’s interior keep family members connected to the outside world as well as the inside.

Architecturally, Mit Chit House was designed with geometric manipulation at its core to precisely create a pleasing, modern exterior. Its founding shape stems from a square split into planes on an axis, before being turned on themselves into L-shaped pieces that modularly combine into stellar, complex art. Inside however, simplicity is key, with wide open spaces trimmed only by a few select materials to evoke engaging familiarity. The contrast in interior and exterior design choices means every angle from which the house is viewed offers a unique and exciting perspective.

Walls built around the concept of Passive Design keep Mit Chit House’s interior cool, while framing views from within with understated elegance. Not only do they provide much needed insulation from the constant light shining through the southern side of the property, but they also beautifully complement the surrounding lush shrubbery.

Mit Chit House is situated along the left side of the property, leaving room on the right for a large garden that serves to connect the original and new houses. On the ground floor, a large common area consisting of the living and dining rooms is designed as an Open plan to foster continuity from the front of the house to its back. The vertical space between the ground living room is also entirely open, connecting seamlessly with the second-floor den.

This way, even distant family members still feel close. In keeping with the notion of togetherness, the den acts as an intersection between the old and new houses, allowing the parents of the family to easily make their way to their children. An open space of its own, the den also boasts great scenic views. Topping everything off is the third most private floor, comprised of the two siblings’ bedrooms complete with views of the property’s private gardens on either side.