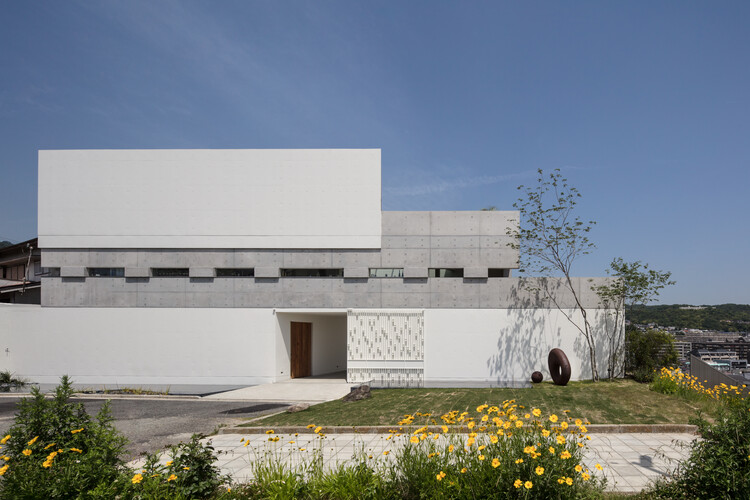 Text description provided by the architects. The north of the block is connected to rokurokusocho, one of Japan’s senior residential areas. The remains of the quarry were found near the site, where the Tokugawa family processed the stones used for the stone walls during the restoration of Osaka City. Our residential site is located in such a historical and civilized place.

The site is about 26 meters away from the road. It is located on a hill, we planned to use the site to overlook the area from Mt Kabuto to Osaka. The mixed design of painting and fair faced concrete and combined with the fixed glass, which not only makes a lightness feeling, but also has a strong building façade in a horizontal direction. In addition, the couple and their son couple live together.

Although some of them have office space, the three spaces are independent in the unified family. The mainly private space is located on the first floor. Even if the internal space is limited, the external environment can be actively introduced to ensure that more space can be expanded. LDK is mainly set up on the second floor.

In order to achieve a large open space, although it is affected by the beam in structure, the large opening and horizontal opening of the structure are used to separate the internal space, we can see different views in the same space. The living space of the son and his wife is set on the third floor, which maximizes the utilization efficiency of the limited space.

At the same time, in order to make the whole space look down from top to bottom, there are no walls and doors in the space. Instead, LDK, bedroom and bathroom are integrated. In addition, the exposed surface of softwood plywood creates a sense of composure in a tight texture. Although it is a low-rise residential area, the structure is made as a design as it is without the floor or ceiling, and the parking space on the north side can solve the problems of the northern oblique line and the limitation of the shadow at the same time.

In the design of a building façade made of fair faced concrete and white paint, the texture of indoor plants, external environment, ancient materials, etc. It will generate a sense of warmth in the space, and the living environment will become better. You can see the plants from any room, nature and people coexist harmoniously, blurring the boundary between inside and outside, creating an interconnected living environment.